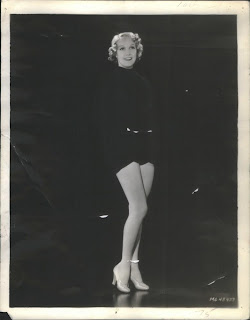 So as many of you who are familiar with the mysterious death of actor George Reeves, you then are familiar with the affair he had with MGM Vice President Eddie Mannix's wife, Toni. What many may not know though, is the fact that during the beginning of Toni's relationship to George, she was not married to Eddie. In fact, the information I am about to present to you will probably throw you for a loop. I am still actively searching for more information in regards to other aspects of this story, but for now, I will give you what I have dug up so far.

Toni Lanier was born Camille Antoinette Froomess on February 19, 1906 (based on US CENSUS RECORDS 1920) in New York where she appears to be one month shy of 14 years of age at the time. The records also show her to be of Russian ethinicity with her family who immigrated from France.

I cannot find where the name Toni Lanier came into play, however it could have been a stage name that Ziegfeld gave her when she started appearing as a dancer for the Ziegfeld Follies. In fact, she was revered as such a great dancer with the best pair of legs, that Ziegfeld insured them for $1,000,000.00 (one million dollars) while she performed for them. Later on she her legs were insured with Lloyd's of London for $25,000 per leg!

When Toni met Eddie Mannix, she had become irate over how she was being treated while on the set of  The Great Ziegfeld so she stormed off and 'allegedly' headed for Hawaii. As the story goes, Mannix was sent to fetch her and bring her back. I guess sparks flew between the two of them and Toni began seeing Mannix.  Although, Eddie was not the only man she was dating at the time. Toni Lanier had a reputation of being a "girl about town" and many newspapers stated her dating several men and even allegedly marrying Jesse Livermore, Jr., who inherited a franchise of the Pepsi Cola Company in 1937.  Mr. Livermore, only 18 years of age at the time of this 'alleged' wedding was the son of Jesse Livermore, Sr. and wife, a former Ziegfeld Follies dancer as well, Dorthea Wendt (who was 23 years his junior). Mr. Livermore (Sr.) was a successful businessman often referred to as "Great Bear of Wall Street" or "The Boy Plunger." What I find interesting about this "wedding" of Toni Lanier and Jesse Livermore Jr.,  that allegedly had taken place was the fact that only 6 months later Jesse wed Evelyn Bletzer Sullivan of Baltimore in November of 1937. It seems that Livermore's relationship with Ms. Lanier may have just been publicity hype after all, unless they had an anullment shortly after the secret marriage.

From what I have read on Ms. Lanier, she was a big mouth and a little on the rude side. In fact, I read an article (News-Sentinal June 2, 1936) where she blatently criticized any girl who danced Hula because it "makes the calves bulge."

She went on to say: " Hawaiian beauties haven't got a chance in competition with girls over here because of their hula-ing and because they go barefoot and their legs grow heavy. When girls of this country become as 'leg conscious' as the men are, we'll have healthier women and lovelier legs. There's no excuse for misshapen legs, it requires only a little care to form the muscles properly, excepting of course, in the case of thick ankles. I don't know what can be done about that!"

Sounds like a peach huh?! No wonder Mannix loved her, she was his counterpart!


Someone Was Still In The Way 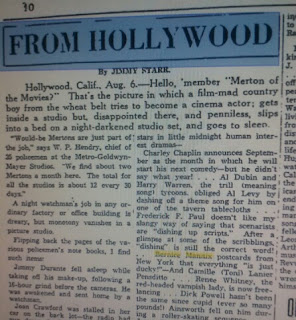 Toni and Eddie's relationship seemed to pick up steam just around the time that Jesse Jr. married Evelyn.
But, Eddie was still married to his wife of 18 years Bernice Fitzmaurice, daughter of Irish parents back east. According to my sources, Bernice learned of the affair that Eddie was having with Toni and she filed for divorce, moving out towards Palm Springs. The oddity of this whole situation is the fact that I believe that Toni and Bernice knew each other before Toni hooked up with Eddie Mannix. Why you ask?

Well according to The Reading Eagle (August 6, 1934) it states various statements made by stars and socialites in regards to various events or vacations. It says:

"Bernice Mannix postcards from New York that everything "is just ducky!"- And Camille (Toni) Lanier Pensditto"....
I think that they made a typo and meant to say "Camille Lanier pens "ditto," meaning that she agreed with Bernice. Very interesting, if you ask me. What in the world were the two of them doing in New York together? Were they vacationing together? They had to have been friends or acquaintances at least to be mentioned together in the same article.


By 1937, Bernice met a terrible fate when the car she was riding in with Al Wertheimer, a Detroit mobster crashed. Wertheimer was also an owner of  ‘The Dunes’ a popular nightclub where Bernice had been gambling and drinking until the early hours of that morning. According to the book “Spencer Tracy: A Biography” by author James Curtis, Bernice was crushed on impact after the car Wertheimer was driving swerved to avoid a tow truck that was stopped in the middle of the road assisting and broke down vehicle. Wertheimer slammed on the brakes and lost control of his coupe and went off the road flipping several times and throwing Wertheimer from the vehicle. Eddie flew out to Banning as soon as he got word of the accident. Later on Mannix, his niece Alice and Howard Strickling travelled via train to Boston taking with them Bernice’s body to her mother Margaret Fitzmaurice to have her buried. (one note:  Eddie Mannix was said to have been unable to have children, therefore Bernice spoiled her nieces and nephews as if they were her own children.)


Not soon after Bernice was buried, Toni Lanier dug her claws into Eddie Mannix by moving in with him right away. She continued her relationship with Mannix (unmarried) for many years, sometimes she would use the name "Mrs. Mannix" in order to get the right treatment in social circles, however she did not marry Eddie Mannix until 1951. ---Many have speculated that Eddie may have had Bernice killed or even perhaps Toni played a part in the whole thing? Makes you wonder... 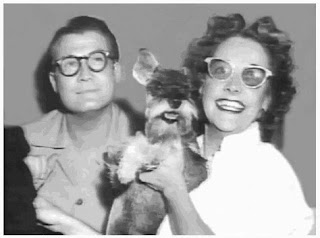 The time frame in which Toni met George Reeves is often speculated. In the movie, "Hollywoodland" Reeves character is portrayed running into Toni Mannix at a upscale Hollywood night club near the beach (in California). More than likely Reeves actually met Toni in New York while he was working there. The fact is, Reeves was already "intimately" acquainted with Toni long before her wedded bliss to Eddie Mannix.

One may wonder why Eddie Mannix would put up with that sort of relationship before tying the knot, but you have to recall that Eddie was very close friends with Spencer Tracy, who also was married and had Katherine Hepburn on the side. Open marriages in Hollywood were "taboo" but were also secretly happening. Perhaps Toni had dirt on Eddie and one more dead wife would be too much for even big shot MGM to cover up. Perhaps, Eddie was happy with his affairs and just wanted to make Toni happy by letting her keep her "boy-toy" Reeves. Whatever the case, let it be known, Toni Mannix was NOT married to Eddie Mannix when her love affair with Superman began......